tim1_2 wrote:What in the everliving Diddle.

Hammond's wife just tweeted that this isn't really a surprise, with the meaning being that Hoff/girlfriend are bad people.

There's another wife that has some not so nice things to say....doubtful that she joins in, but man the truth is going to come out and there's not much of a defense.

I want to make sure I'm clear that there's still no evidence that Mike even knew. Yes he's come to his fiance's defense but right now it doesn't appear he knew. It will be interesting to see how he handles the situation when all the evidence is put in front of him.

Number of posts : 5058
Age : 91
Location : Ottawa
Favorite Team : Ottawa
Registration date : 2011-05-23
This all could have happened after the deadline and the org kept it quiet not to impact trade value.

I've NEVER heard anything like this - and the responses from Turris and Hammonds wife are amazing. 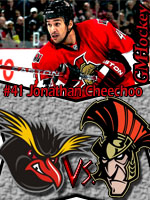 PTFlea wrote:How does your gm not know this and have traded him long ago?

First it's quite easy...you're asking a gm to track all the social media accounts of all the players and their girlfriends/wives as well as have a PI contanstatly look for the ghost accounts they might create for stupid stuff like this. Second there's still no proof that Mike knew, although the evidence is now starting to mount that if he didn't know it was her that posted the stuff he was at least aware of an issue.

Third, there is always issues with the wives/girlfriends of players on the team. Maybe not all of them, but I'm not aware of a single team in the history of the game where all the better halves got along. So the stuff that the other wives are starting to talk about (ie not being shocked) isn't uncommon. I don't mean the stuff said, but the fact that there were issues between two of the women on the team.

It's not up to the front office to police that unless it gets out of hand, and there's a lot of evidence that Melinda Karlsson didn't want to make a big deal about it so didn't. It wasn't until things went bat Dung crazy about mid late March early April that the Karlsson's decided enough was enough.

The team doesn't nor should they care about issues with the wives, but once it was brought to their attention (Karlsson's people let the team know that they were seeking the restraining order) that the team took notice. The story is going to get worse, when more details get out. This is the end of Hoffman, but then again that was decided a long time ago. He wouldn't be the first player traded because the star player had an issue with him or his wife, and he won't be the last.

Karlsson may not decide to stay, but regardless Hoffman's days in Ottawa are done. It's possible that he can prove he had no knowledge and decides to kick her to the curb (if she is *ahem* guilty) but short of that he can't stay in this city. No more than Bill Buckner could stay in Boston, or J.R. Smith can stay in Cleveland.

We could be without our top dman and top Scorer soon and nothing we can do about it. The issue for me isn't whether the front office knew about any of this, it's that when there's one bad thing you can excuse it, maybe two or three but since November it's been a steady stream of huge media blunders that just keep pushing the team to new lows.

I'm starting to believe the only way the NHL can correct this is with a new owner...I'm starting to get the feeling that the fans are not going to accept anything less.

WTF is going on!
Ive dated my fair share of crazies but come on Hoffman! You got to keep that under wraps!
Yeah no doubt this means Hoffman gets traded. I doubt it will hurt his value. Just another nutty bunny.

But if we want any chance of keeping Karlsson Hoffman is dealt in a big way.

PTFlea wrote:How do you not know that's happening if you're Hoffman?

Because you're in love with the person and when she says she isn't doing what the other wives/players are accusing her of you take her at her word. Even if you search her phone you don't find any instagram/twitter accounts that match the ones they are complaining about.

I will say this...Shame on the Sens. I reached out to a contact yesterday, and they confirmed that the Sens have known for a while (at least 3 months) about the aligations, and he also said the other teams he's been with all are very diligent knowing everything going on with everything in the team. Status of parents, kids, wives, and players. He said a good organization will constantly be looking for potential problems and end them quickly. He said in this case the senators were aware of an issue and decided to let them handle it themselves...

This is going to get worse folks...

Number of posts : 2954
Age : 34
Location : Toronto
Favorite Team : Ottawa
Registration date : 2018-01-26
It is going to get a lot worse, same as with Lee. Our bare bones staff have no time to deal with this as it happens. Most other teams have this under wraps and dealt with.

When you try and think what else can happen to make us more of a laughing stock, all I can think of right now is signing Voynov, Colorado offer sheeting Stone and Karlsson just walking at the end of this year as payback for not handling this properly and making Melinda go public.

Number of posts : 57363
Favorite Team : Ottawa
Registration date : 2008-07-31
If we've known since the deadline, we're morons, although I would fully expect an opposing GM to do his homework when acquiring a player like Hoffman with term and $$ owed.

Number of posts : 5058
Age : 91
Location : Ottawa
Favorite Team : Ottawa
Registration date : 2011-05-23
Things like this happen in the NHL all the time. Look back at Brind'amour & Lindros, Pronger, Spezza/Heatley (allegedly), etc.

This situation is a little different because it's between players' wives. I am sure in hockey circles wives may not like each other, they may talk dung behind their backs, trash-talk, etc. This is no different with the exception of it becoming public. Trolls like Hoffman's fiancé exist and are present online all the time. What's different is she got caught and the linkage between players is surprising. This probably would have been kept private or had a much smaller impact if Melinda didn't file until after Hoffman got traded. I believe this is a case of the media jumping over an opportunity to stick their noses in a private matter while kicking the Sens organization while they're down (and rightfully so).

The real question is whether or not Hoffman knew. People cheat on their wives and husbands all the time without their partner knowing. I'd argue that cyber-bullying is much easier to keep under wraps than physically cheating on a spouse. So it is quite possible he didn't know, or if he did, maybe he didn't know the severity or thought it was just normal beef. As per his comments, any of us would defend our spouses no matter what. That is until all facts were presented to us and we could make a rational decision. He may not have known everything - at the same time he may know everything.

My theory is this came to light after the trade deadline but before the season ended, and before the trading period re-opened earlier this week. They may already have a trade completed for Hoffman but were waiting for the draft to announce it because it included a pick. Would have made things more exciting and helped ratings. Hoffman will still get traded. His agent should be advising him to release a statement saying that he didn't know this was happening, he will cooperate in the investigation, and his fiancée will get the support she needs (ie: rehab, sensitivity/harassment training, etc) if this information is true. If he was a party to this and knew it was happening this could be the end of his NHL career.

Let's not forget P Kane punched a cabbie in the face, I believe one of the Staal brothers did something stupid, Heatley killed his best friend, E Kane is a prick, Emery was a drug addict, etc. Hockey memories are short and people move on. Hoffman will be traded, his fiance will get 'help' or will be thrown to the curb, and that'll be it.

Number of posts : 18651
Age : 38
Location : Ottawa
Favorite Team : Ottawa
Registration date : 2011-01-07
Yeah, I think as far as Hoffman goes, he'll just deny knowing anything about it, get traded, and that will be that. This certainly hurts his trade value, as now it's clear that he HAS to leave Ottawa (kind of like the Heatley situation). So Dorion's not really in the driver seat.... Man I feel bad for Dorion. A donkey of an owner, a mess with his assistant GM, player issues up the ying yang, etc. And there's nothing he could really do about any of these things....

Re: Ottawa Senators (present and past) TIDBITS & QUICK HITS!

» Ottawa Senators (present and past) TIDBITS & QUICK HITS!
by Ev Yesterday at 3:15 pm