- After a bit of a slow start, Robin Lehner has posted astounding numbers on his way to a 4-2 record with an excellent .927 Save % in Binghamton. This will be his first start for MacLean in a regular season NHL game and he'll be under the gun against the Leafs.

- The line of Greening - Spezza - Michalek are on a tear. Combining for 5 points last night, they were pivotal in turning the tide against the Rangers, with Michalek scoring both the tying goal and the shootout winning goal, Spezza scoring 2 in the third and Greening making Lundqvist's life hell. Look for more of the same!

- The return of Gonchar and Kuba is widely celebrated right now in Sensland, and why not. They've both played some of their best hockey to date for the Sens recently and look to continue.

- Butler draws in - although Filatov was called up, it appears that Butler will draw into the lineup tonight - or is there another lineup change on the way? Certainly won't be Konopka, unless he gets suspended...

- Alfredsson won't play tonight after a hit to the head by Wolski last night in NY, his long term status is unknown.

- Da Costa has another big game tonight to show that he belongs as the 2c - and to support Spezza and co. Watch out for Dion!

Number of posts : 51273
Age : 59
Location : Kanata
Favorite Team : Ottawa
Registration date : 2008-08-05
That Wolski ruling doesn't make sense on any level, now. There was a penalty given on the play, so the refs saw that as an illegal hit. Wolski, himself, said he thought it was a clean hit, which means he admits it was a hit. Shanahan says he was just bracing himself as Alfie skated into him.

Now, I'll stand by what I said earlier (in yesterday's GDT) that I didn't think he would get a lot, because Alfie *did* veer to his right at the last second, so I don't think Wolski went out of his way to hit him, like some have said. But he did stick his elbow out, and it was assessed by the on-ice referee as an illegal check to the head.

Sorry, when *I* brace myself for impact I tuck my elbows in against my sides, not stick them out. That was a weak explanation, to say the least.
_________________
Hey, I don't have all the answers. In life, to be honest, I've failed as much as I have succeeded. But I love my wife. I love my life. And I wish you my kind of success.
- Dicky Fox

Four of Michalek's 7 goals have come on the PP.

Was in Ottawa last night for a party and caught the OT and SO session of the game. 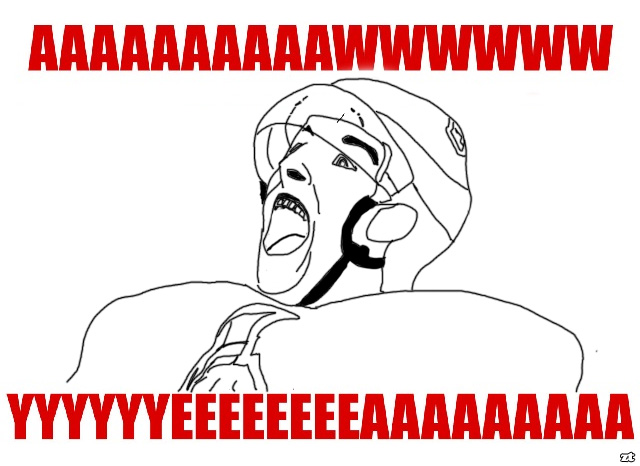 
CraigAnderson41 Criag Anderson
Shootout win! Nothing better to decide the game. I'm not a forward but its gotta be a stressful moment for them. I'm glad I'm the goalie.
25 Oct Favorite Retweet Reply

I can't agree with his second sentence. I can't. I won't. But it's awesome hearing your goalie saying he loves it and feels bad for the forwards

Dash wrote:Should be noted that Kessel is on fire - 10 goals and 18 points for the league lead in both categories.

Four of Michalek's 7 goals have come on the PP.

Isn't he over a goal a game against Ottawa in his career?

wprager wrote:Konopka is scratched. Neither Rosehill nor Orr is dressing -- probably had something to do with that.

Hopefully Phaneuf doesn't take any cheapshots on Spezza or Michalek.

wprager wrote:Konopka is scratched. Neither Rosehill nor Orr is dressing -- probably had something to do with that.

Hopefully Phaneuf doesn't take any cheapshots on Spezza or Michalek.