The Calgary Flames missed a chance to secure their first Northwest Division title in four seasons. To clinch, they will attempt to take advantage of their provincial rival who will again miss the playoffs.

The Flames will also look for a more consistent effort as they finish the regular season with a home-and-home series against the Edmonton Oilers that begins Friday night at Rexall Place.

Vancouver's 1-0 win on Thursday over Los Angeles dropped Calgary (45-29-6) two points behind the Canucks in the Northwest and to fifth in the Western Conference. Vancouver has only Saturday's game against last-place Colorado remaining, and should the Canucks and Flames tie, Calgary holds the edge in victories.

However, Calgary couldn't win one of its most important games of the season Tuesday in Vancouver, getting only one of their 47 shots past Roberto Luongo in a 4-1 defeat. The Flames also failed on all six power-play chances, extending their drought to 0-for-36 over the last eight games.

Calgary also has been outscored 21-11 in dropping five of its last eight.

"Our power play needs to take a lot of blame and, also, Luongo was very good," said Jarome Iginla, who scored. "We threw a lot at him. They weren't just bad shots. We had a lot of good shots and, unfortunately, we didn't get more by him."

Iginla has four goals and two assists in the last six games and a team-best 89 points, but Olli Jokinen and Michael Cammalleri haven't been producing.

Jokinen had eight goals and two assists in his first six games after he was acquired in a March 4 trade with Phoenix, but has four assists in the past 11. Cammalleri, whose 36 goals lead Iginla by one, has scored two times with nine assists in the last 16 contests.

Iginla and Cammalleri set career highs with five points on Dec. 31 in a 6-4 home win over Edmonton -- the first of two straight victories over the Oilers. The Flames also took a 3-2 shootout win at Rexall on Feb. 21 after dropping the season's first two meetings.

Miikka Kiprusoff has recorded all of Calgary's 45 wins this season, but has suffered through inconsistency in four April starts, giving up four goals in each of two losses and one in each of the last two wins. He has allowed 13 goals in four starts this season against the Oilers.

Edmonton (37-34-9) has been consistent over its last seven games, but not the kind the Oilers wanted. After moving to seventh in the West on March 20 with their third straight win, they have dropped seven of their last nine. A 2-1 loss to lowly Los Angeles on Tuesday night coupled with St. Louis' win over Phoenix eliminated Edmonton from the playoffs for the third consecutive season.

The defeat dropped the Oilers to 1-4-0 on their season high six-game homestand.

"We faltered at the worst possible time of the year," captain Ethan Moreau said. "The last couple weeks we didn't get the results, regardless of how we played." 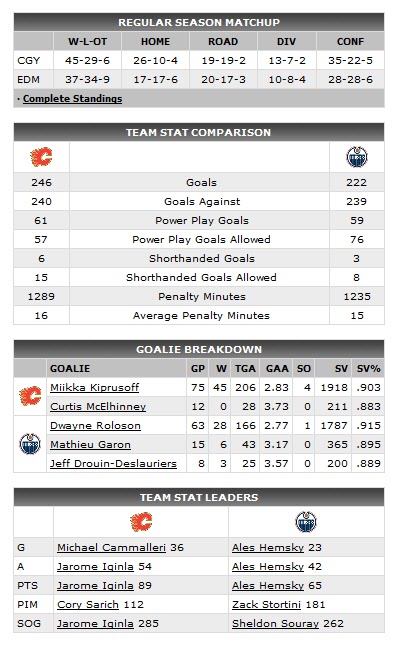 From Randy Sportak at The Calgary Sun today:

Jarome Iginla is as nice a person you'll meet.

But the Calgary Flames captain sure can be greedy at times.

Asked whether it was more important to go into the playoffs firing on all cylinders or having won the division title, Iginla's choice was both.

"I don't think it's all just about the division, but playing our best would probably lead to winning our division," he said. "I think our game's improved as a team the last 10 days and going in the right direction, which I think is the most important thing.

"But (the division title) is in our hands. We don't have to watch Vancouver. It's two games and we can win the division.

"I think they go hand-in-hand and we want both."

Those two games would be the home-and-home Battle of Alberta series which begins tonight in Edmonton against the Oilers.

The Flames are all too aware what's on the line. Tonight's clash is a biggie, and regardless of what happened in last night's Canucks game, winning in Edmonton will go a long way in relieving the pressure before tomorrow night's regular-season finale at the Saddledome.

Winning the Northwest crown means the No.-3 seed.

"It's a dangerous team," said Flames centre Craig Conroy. "Those are teams out (of the playoffs), playing for pride and want to do well, finish strong. I expect they're going to be at their best, playing relaxed. We have to be the more desperate team."

The Flames are desperate.

But that's just to ice a full roster. Already without a bevy of defencemen -- Robyn Regehr, Cory Sarich, Mark Giordano and Rhett Warrener are all on the shelf -- Calgary practised without Dion Phaneuf yesterday.

Head coach Mike Keenan said Phaneuf's absence was to give him some rest. But the team summoned John Negrin from the minors and sent down forward Warren Peters, so it's a good bet Phaneuf's status is at best questionable.

Or maybe left-winger Rene Bourque is ready to return. Bourque didn't skate yesterday, but Keenan said the 21-goal scorer who has been out the last seven weeks has made big improvements.

"The only way you can look at it is whoever's in the lineup has to be able to play and produce," said defenceman Jordan Leopold.

"We're here to win hockey games, and it's as simple as that. It's a good opportunity for some of us, myself as well. I'm getting more ice time than with the big guys in the lineup and I have to play to my best abilities."

Still, this sets up a crazy scenario. The Flames could face their biggest rivals, with a division title on the line, using as few as 16 skaters.

If that's not enough, it would be with three rookie defencemen -- one who'd be playing just his second NHL game (Negrin) and another his fourth (Matt Pelech).

"The simplest advice to give to them is just relax," Leopold said. "It's easier said than done, but it's best to just play the game. You can't be over-thinking it. You played as a kid and at this level there's Xs and Os and systems, but in the scheme of things, you have to go have fun and just play.

"I'm excited for the challenge. It's a good opportunity for me. When I got traded here, I wasn't playing a lot in Colorado and now we have a shot at the Stanley Cup. It's very exciting."

The Flames aren't coming off a win, but their last game -- a 4-1 loss to Vancouver -- was as strong an outing as we've seen in a long time. They controlled every aspect of that game, but lost simply because Canucks goalie Roberto Luongo was at the peak of his game.

Replicating that performance would go a long way to ensuring a couple of wins against an Edmonton team that's turned to back-up netminder Jeff Drouin-Deslaruiers.

"We didn't get the result we wanted, but we did a lot of good things in that game and want to build on that," centre Olli Jokinen said of the Vancouver game.

"If we get 40-plus shots and play the way we did in Vancouver every single night, we like our chances."

The good news for Calgary is knowing what they need to do before they drop the puck.

With last night's Vancouver game in the books, Calgary will be aware whether a win tonight is to clinch the title or just to hold even with the Canucks in points and ahead with more victories.

Jokinen said his team doesn't need any extra motivation at this point.

"We had a huge game the other night in Vancouver and this game is even bigger. We control our own destiny," he said.

Isn't Preds/Wild more "GOTN" than this one?

But I picked the Flames-Oilers because they are a classic rivalry...and Canadian...and the Flames need to win as much as the Oilers will (if they have any stones) want to beat them.

Well, for Tank Nation's sake, I hope Edmonton pulls this one off.
BUT, I want that CBJ/VAncouver series, so CAlgary winning will also be fine.

My friend is a huge Oilers fan, and we made a bet for a case of beer to whomever ranked higher in the league at the end of the season. Needless to say, we both figured they'd be in playoff contention.

But down to the wire, and the two teams are tied- Edmonton with a game in hand- It's going to be interesting to see how this one plays out. Calgary desperately needs those points to warm themselves up going into the playoffs, and also take charge of their division and get home ice advantage in round 1.

Who knows- ANYTHING can happen with the battle of Alberta!

marakh wrote:Well, for Tank Nation's sake, I hope Edmonton pulls this one off.
BUT, I want that CBJ/VAncouver series, so CAlgary winning will also be fine.


A Nucks-Jackets series would be awesome for sure...BobbyLu Vs Stevie Wonderkid...

So, Marakh, will you be cheering for the Oil?

The Oil are greasing the skids for the Flames...5-1 with two minutes left.

Jeff DoubleD has been DOMINANT.

marakh wrote:Well, for Tank Nation's sake, I hope Edmonton pulls this one off.
BUT, I want that CBJ/VAncouver series, so CAlgary winning will also be fine.


A Nucks-Jackets series would be awesome for sure...BobbyLu Vs Stevie Wonderkid...

So, Marakh, will you be cheering for the Oil?

Sorry, Late. I was cheering for the Oilers yes. I want Josefson at 9th cool)

» Ottawa Senators (present and past) TIDBITS & QUICK HITS!
by DefenceWinsChampionships Today at 7:06 pm